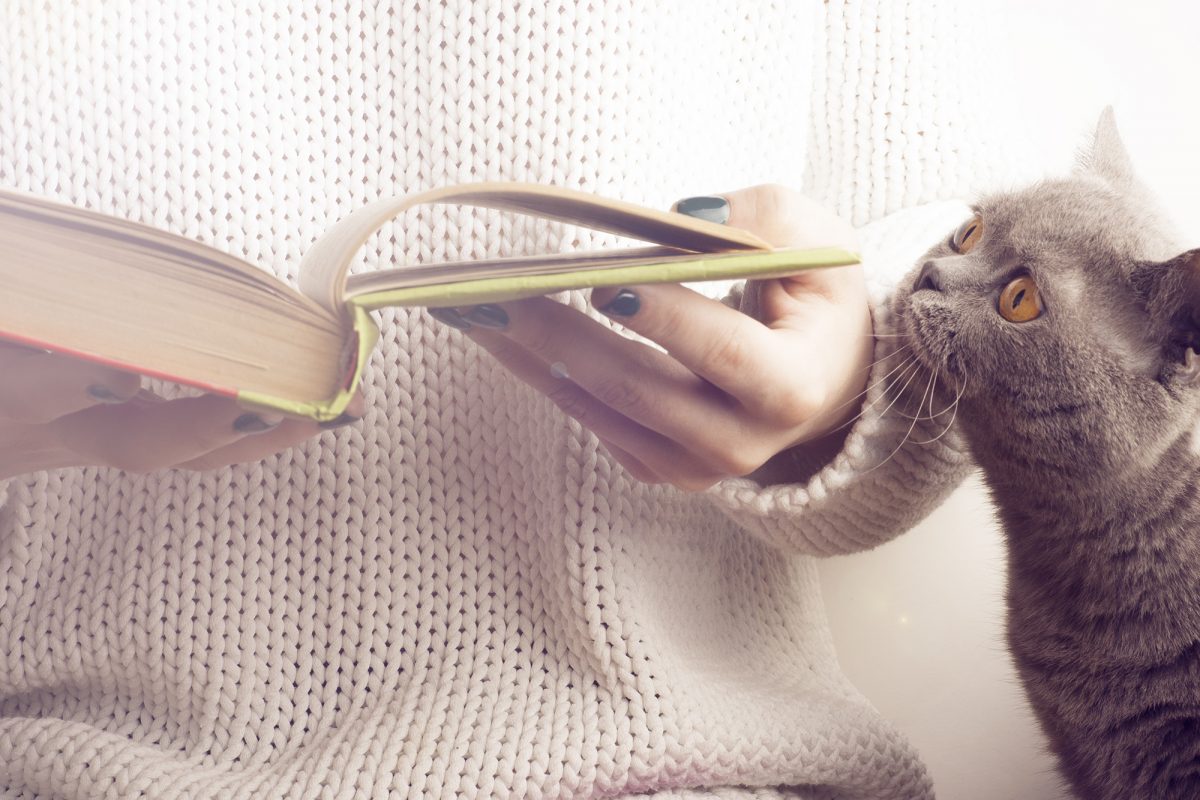 Cats have always had a place at the heart of culture. Previously Cat in a Flat looked at the finest feline films, and now we’re focussing on compelling cats in literature. We reached out to our community to find out which books featuring cats have most ignited their imagination. Below are some of their favourites; a little bit of literary inspiration for you during lockdown and beyond.

“We hope these books provide inspiration for cat sitters, perhaps while spending some quality quiet time with a new furry friend! And equally for cat owners, whether at home or on holiday.“

James Bowen was a recovering addict when he found an injured ginger tomcat in the hall of his sheltered accommodation. When he decided to take the cat to the vets, it was the start of a transformative friendship. Bowen credits Bob, the cat, with helping his recovery and changing his life forever. The pair became a popular site around north London – especially because of Bob’s penchant for standing on his owner’s shoulders. A local newspaper soon picked up Bowen’s story and from there it became an international best-selling book and successful film. You can read about the film of A Street Cat Named Bob in Cat in a Flat’s article on “The best cat films to watch now”.

Mischievous Sid lives between six different households on the same street. Each night Sid gets six different dinners, something he is particularly proud of. The cat is happy having six owners, six names and six soft beds until one day he gets a cough. Then poor Sid has to go to the vet six different times, and his unwitting owners discover his scam. Inga Moore’s beautiful illustrations and compelling storytelling reveal the sneaky side of cats many owners will recognise. Sid so charmed readers that Moore released a second book, Six Dinner Sid: A Highland Adventure in 2010.

3. Where social media meets verse: The Adventures of a Curious Cat (2019), Curious Zelda

Curious Zelda is a social media cat star who has charmed thousands with her permanently startled expression and strange habits. Zelda has also become quite the wordsmith, known for crafting cute, witty and weird short poems on Instagram and Twitter. With the help of her human, Zelda released a book at the end of 2019. The Adventures of a Curious Cat is full of great advice, beautiful illustrations and photographs, and Zelda’s finest poems.

T.S. Eliot’s poems about cats are now iconic for the way in which they describe our furry friends. Old Deuteronomy, rebellious Rum Tum Tugger, mysterious Macavity and magical Mr Mistoffelees are all literary legends. The book is also the inspiration for Andrew Lloyd Webber’s hugely successful musical, Cats. This version of Eliot’s collection of poetry is particularly special because of Axel Scheffler’s delightful and funny illustrations.

In Pet Sematary the Creed family move to a new house in Maine next to a Native American burial ground. Big mistake. Soon after the move, the family’s beloved cat, Church, is run over on the busy road next to the house. The father of the Creed family, Louis, buries Church in the burial ground. The next day the cat returns home but is a shadow of his former self, a hollow, evil, zombie version of Church. Stephen King said that of all the horrors he has written, Pet Sematary scared him the most. Be warned, cat lovers of a sensitive nature won’t enjoy this book.

6. Best for literature buffs: The Master and The Margarita (1966-67), Mikhail Bulgakov

This novel is one of the most important works of contemporary Russian literature. Bulgakov wrote the book in the 1930s, but it wasn’t published until the 1960s because of its damning, satirical portrayal of Soviet Russia. In The Master and The Margarita, the devil comes to Patriach’s Ponds in Moscow accompanied by a curious entourage of characters. The most memorable is perhaps Behemoth, an enormous and extremely talkative black cat who walks on two legs. Behemoth loves vodka, chess, guns, causing trouble and making inappropriate jokes.

Hilary Mantel’s The Mirror and the Light is the conclusion to her Wolf Hall series and one of the most highly anticipated novels of 2020. The series follows the story of Thomas Cromwell, chief minister to King Henry VIII of England. At the beginning of The Mirror and the Light, a striped African cat, bought from Damascene merchants for a considerable price, tries to escape Cromwell’s garden. In the book Cromwell also receives an anonymous gift of a caged leopard that remains starving in his yard. Mantel often connects Cromwell with cats. Earlier in the book series, in Wolf Hall, Cromwell adopts a black kitten he calls Marlinspike from Wolsey, his predecessor at court.

In The Boy Next Door, Melissa (known as Mel), is a gossip columnist at the fictional New York Journal. The book starts with Mel being late to work after finding her neighbour injured and needing hospitalisation after an attack. Mel is left in charge of caring for her neighbour’s Great Dane, Paco, and Siamese cats, Tweedledum and Mr. Peepers. The story follows the hunt for the attacker, a crime reporter in disguise and a romance interrupted by a kitty-related medical emergency.

Anne Fine is a beloved British children’s author, with a particular skill in capturing the lives of animals in words. Fine was the Children’s Laureate in Britain from 2003-2005 and was the runner-up for the Hans Christian Anderson Medal in 1998. In 1994 she wrote about Tuffy, a badly behaved cat who can’t understand why his love of killing birds and mice upsets his family. His owner, Ellie, wants to change his ways before Tuffy gets himself into trouble. The Diary of a Killer Cat is sweet and funny and so popular that Fine wrote another three books about Tuffy. Illustrator Axel Scheffler provided the artwork for a particularly covetable German version of the book in 2015.

This popular series of Dutch children’s books stars Dikkie Dik, a big naughty orange cat. The Dutch version of Sesame Street,  made Dikkie Dik famous in 1978 when his stories started appearing on the show. The tales of Dikkie Dik then became a beloved book series, with each volume beginning with the same line: “Here is another new adventure of Dikkie Dik.” The stories of Dikkie Dik were created and drawn by Jet Boeke and it was her kitty who inspired the book series. Perhaps that is why the character resonates so clearly with cat owners.

Maisie McKenzie is a brave tabby kitten and one of the best-loved characters in British children’s literature. Maisie was created by author and illustrator Aileen Paterson in 1984 and went on to star in dozens of popular books. The kitten comes from Morningside, a suburb of Edinburgh, and being Scottish, always wears a kilt. The books follow Maisie on her adventures across Scotland and the world: having fun, making new friends and investigating mysteries. In 2015 the British government awarded Paterson an MBE for services to children’s literature.

This children’s book is based on the ancient British fairytale about a house cat that becomes the king of all cats. In Barbara Sleigh’s book, a little girl adopts a black cat from a local woman, Mrs Cantrip. The cat, Carbonel, reveals to the girl that he can talk and is also the king of cats. She finds out that the cat’s previous owner was a witch who abducted Carbonel and enslaved him. The cat and the little girl have to find Mrs Cantrip to get her help returning him as ruler of all cats. The book became the first in a popular series about Carbonel and his royal adventures.

Japanese author Natsume Sōseki wrote this humorous and satirical novel in the voice of a cat. In the book, the nameless kitty describes the lives, mistakes and idiocy of a selection of people in his middle-class community. Sōseki writes the cat’s voice in a deliberately archaic and overly formal high register, usually reserved for nobility. Sōseki originally wrote the book as ten instalments for literary magazine Hototogisu before releasing them as a single work. The book was translated into English in 1972 and made into a film in both 1936 and 1975.

Now you have a reading list full of stories about our furry friends, find out more about keeping your cat entertained on the Cat in a Flat blog.